With the tip of his pinky, Sasuke traced the round strokes of the letters of his name etched on the empty cup of coffee.

The contents had been drained over an hour ago but he couldn’t will himself to toss the cup into the trash bin. At least not until he got the next cup.

But it wasn’t likely that Haruno would be making another coffee run with how late in the day it was.

He would just have to hold onto the paper cup she had scribbled his name on until her break the next day when she would pop on over to his work station and ask if he wanted her to pick him up anything while she was on her break.

Sasuke was always working straight through his and it was nice that someone had noticed.

Especially that the assistant with rose gold hair had noticed.

Haruno Sakura was new to the company, a student taking sabbatical to do some temp jobs. At least that was how it started. Somewhere along the way someone higher up must have forgotten that it was a temporary position and she was never returned to the temp agency that had assigned her to their office.

Obito had responded with a “oh really?” and let it go. He didn’t tease him at work but every now and then he would pass by Sasuke’s desk and give him a sly grin when he spotted the coffee cup.

Sasuke didn’t care for the taste of coffee. Just because he disliked sweets it did not mean he enjoyed the bitter taste. His preferred drink was matcha tea.

But of course Haruno Sakura didn’t know that when she offered to grab him some on her run for some “real coffee.”

She had tucked a strand of hair behind her ear, a slight blush on her cheeks and without really processing the question Sasuke answered:

And now everyday when Sakura ran out to grab a latte she would bring back a cup of strong black coffee with his name on it. Literally.

“Here are your copies Uchiha-san!”

A cheerful voice broke Sasuke from his reverie.

“I keep telling you to just call me Sakura.” Sakura made a tutting sound and put her hands on her  hips.

Sakura snatched the paper cup and tossed it out. All Sasuke could do was watch her throw it in the trash.

At least she would be bringing another one by the following day.

“I’m going to grab some coffee.”

Sakura stood in front of his desk, wringing her hands around the skinny strap of her shoulder bag.

Sasuke reached for his wallet to grab some money for his share. She always insisted it was on her but after weeks of buying coffee every day it was getting to be too much.

“You always make this face,” Sakura exaggerated a frown, “when you drink it. You get a wrinkle right here.”

Sakura tapped the area between her eyebrows.

“You could have just said no, you know that right?”

Sasuke shifted uncomfortably in his seat. He wasn’t going to tell her that he wasn’t paying attention to her first offer because he was too busy staring at her.

“I can grab you something else.”

Sakura shrugged nonchalantly. Her act was only given away by the dusting of pink on her cheeks.

“Alright then. One can of tomato juice.”

She skipped away before Sasuke could give her any money for his drink.

Sasuke snapped his head to the other side of him. Shisui was snickering from behind his computer monitor.

Sasuke scowled at him and turned away, shuffling through his notes for the meeting in an hour.

“Sakura-chan never offered to get me anything. But every day she’s at your desk.” Shisui tossed him a smirk. “I wonder why.”

Sasuke coughed into his hand and hid his red face behind his computer monitor. 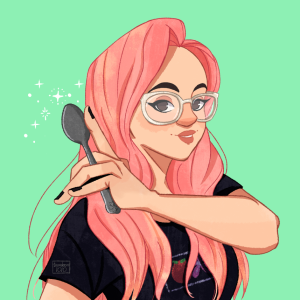 My new icon was a commission designed by toondoon1010 on Tumblr/Twitter. As you can see I’m keeping up with the spoon theme lol.

She is currently accepting commissions!